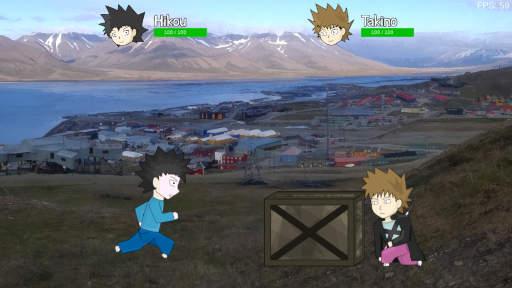 Hikou no mizu (ハイクの水) is a free platform-based fighting game, licensed under the GNU GPL v3 (program) and the LAL (graphics). It works on many operating systems including GNU/Linux, *BSD, Haiku, OS X and Windows.

The characters use natural powers such as water or lightning, but they can also (mostly for now) fight the traditional way!

The project is under active development, you can download the latest binaries or grab the source code from git.

Hi!
A new development version, 0.8.91 is out. You can check it out in the download page!
Also, Hikou no mizu has been packaged for archlinux-based linux distributions and published in the AUR!
If you are using e.g. Archlinux or Manjaro, you can easily install it using a command such as:

Hello there,
Hikou no mizu 0.8.9 is out! A lot of work has been done since version 0.6.2, further detailed in the changelog below. See more of it in the screenshots and download sections!

Hey,
After some years without a news (due to time-demanding studies), I am happy to announce the release of Hikou no mizu 0.6 !
See the download page to download it !

Hi there ! Long time no see ;)
It's been a while since hnm 0.1 was released, so here's a little report of what happened with development last months !
I also compiled a snapshot of the game's current state (rev. 87), which you can download below, enjoy !

That's the first task I worked on after 0.1 was released. Back then, animations used to have a fixed origin point (bottom left of each frame), which made lots of characters' positions impossible. (Eg. : If a character puts an arm left, his arm will become his left origin and his body will move right as a consequence).
Now, each frame both have a content box, containing all the pixels data to be shown on screen, and a body box, only containing the body of the character, thus, the animation is fixed bottom left of the body box, and the overall image isn't fixed anymore (if a character puts an arm left, the arm will go left and the body won't move, as expected).

Along with the new animations format, I also added more flexibility to attacks handling, one can now specify precise hit boxes for characters attacks, at a given time and of a given strenght (hit strength is multiplied by character's strength). Thus, a single attack can damage multiple times, at two different points, ...
Configuration for attacks & animations is done in data/gfx/characters/[name]/data.xml.

The physics engine was completely redesigned due to a conception issue : it was manipulating graphics coordinates, which allows any kind of evil (!) collision. The system is now reversed: physics objects have independant coords that only them can modify, graphics just match them. As a consequence, physics should be perfectly reliable now (at least I wasn't able to cause any unwanted collision). Also, physics object can now change their width & height safely (try to jump on takino ;)).
That's it for physics. Oh ! And you can enable the "debug" mode in the options screen to see boxes yourself :).
p.s: Characters' physics boxes are characters' body boxes. (see "New animation handling").

I improved the GUI system and added new widgets. These new widgets are used in a new "options" screen, where you can edit the configuration in game (currently, only resolution and debug mode can be configured that way). There is still work to do although (Help is welcome ! ;)) : Better widgets graphics, spinner, in game players keys cfg...

This snapshot features a new Hikou (pretty Hikou :3), you can see him in the banner above (pretty banner ;)).
You can find mypaint and synfing animation files on the download repository (link to come). Also, a title screen has been added ! It's a nod to a well-know anime, the first one who writes its name in the forums wins a free beer ;).
I'll now try to draw walking, kicking, walk-kick and walk-punch animations for Hikou, and redraw Takino as well. Anyway, graphics really are a sensible part of Hikou no mizu (It's the kind of project which needs lots of graphics), so, if you like anime drawing, I'll really appreciate any (even small) help :).

Last but not least

Well, I think that's all :). Thanks for reading and thanks for the interest you put in the project !
Don't hesitate to subscribe on the forums, I feel quite lonely these times ;).
See you later !

Since the preview, work was done for improving the renderer : It now supports openGL 1.1 and later. Hikou no mizu was previously using Non-power-of-two textures, only supported since openGL 2.0. Preventing the game to work on many GPU it could run well on.

Data format was modified to handle this. Animations were packed into pow2-sized sprite sheets. This also avoids frame repetition, shrinking the size and RAM-usage of the game (1.9 MiB unpacked against 3.4 MiB for preview). Finally, arenas' data were packed into a single pow2-sized texture.

As usual, here are the download and screenshot sections ! Enjoy :)

After about half and a year of development, the time has come : Hikou no mizu 0.1 is almost ready :) All the core modules were implemented, and the game now has a solid base to rely on.
You can already download it, some changes need to be made for final release however (plus hnm 0.1 should be compiled on Windows).
Here is a quick changelog from release 6 to 0.1

This libraries change was an opportunity to clean up some parts of the source code (such as the Makefile or data/COPYING).
Finally, hnm 0.1 has a certain amount of new features too, including time-based movements, dynamic arena size or end of fight.